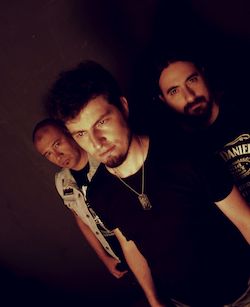 We’re thrilled to welcome in our roster a new excellent act from Spain: MOTHERSLOTH.

MotherSloth is a Madrid-based band formed in 2008. In the band’s style, you can find several influences – 70’s inspired sounds combined with heavy guitar riffs and open chords, blended with spirally progressive melodies.

The band says: “We are happy to have arrived to Argonauta and cannot be more excited with the prospect of working together with Gero and the label, plus having high expectations on our next album which we believe it’s our best so far…”.

After various line-up changes, the band records demos under the title “Death Flowers” (2009), and plays live throughout Madrid with other avant-garde stoner bands. In 2012, with a more defined musical path, MotherSloth recorded their debut EP “Hazy Blur Of Life“, released in 2013 by Peruvian underground label Dooom Records.

In late 2013, MotherSloth decided to focus on the instrumental songs they had been writing throughout the years, recording their new LP “Moribund Star” (2014), released in 2015 with Germany’s Voodoo Chamber Records and available here.

In 2016 the band entered the studio to record their next album, consisting of 6 brand new songs, to be released by ARGONAUTA Records in CD/DD during Spring 2017.