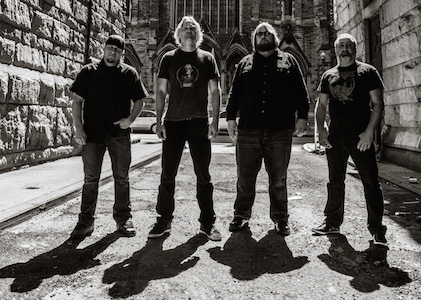 Thrilled to welcome a new great act from the States into our family. Drawing as much influence from the early 90’s Pacific Northwest, as the Maryland doom of that same era, MONOLITH WIELDER are a quartet made up of several veterans of the Pittsburgh music scene.
Formed in 2014 by Molasses Barge guitarist Justin Gizzi, longtime friend and percussionist Ben Zerbe (Halo’s Grace/Mandrake Project), and singer/guitarist Gero von Dehn (Von Dane/Zom), the three began working up the material that would comprise their first studio effort. Later rounded out by bassist Ray Ward, the group started performing live that fall, and headed into Plus Minus Recording studio on Pittsburgh’s South Side in January 2015.
With engineer Jason Jouver at the helm, ten songs were completed in the studio, and later sent off to Jack Endino at Soundhouse in Seattle for Mastering. MONOLITH WIELDER album is scheduled to be released by Autumn 2016.