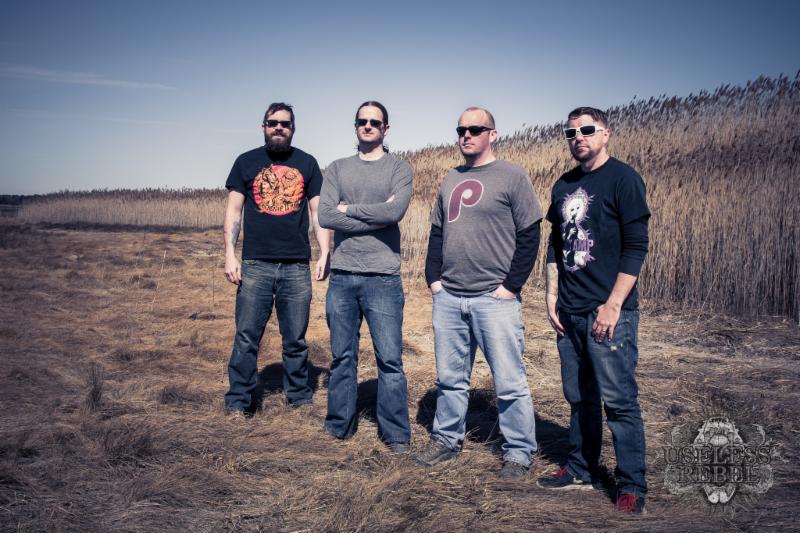 New Jersey sludge crushers CLAMFIGHT present their third album, III, which will see January release through Argonauta Records. Alongside the album’s cover art, track listing, and other details, the band and label have teamed up with Doomed And Stoned webzine to premiere the album’s first single, “History Of The Earls Of Orkney.”
CLAMFIGHT offers, “We’re thrilled to be working with Argonauta for the upcoming release of III.  We had a few options available to us however we kept going back to Argonauta because Gero seemed so genuine and honest to work with. We’re also pretty tight with the lads in Hollow Leg and they had nothing but great things to report regarding their experience with Argonauta. We’re excited about the potential that exists with this budding relationship and look forward to broadening our reach across the Atlantic and helping promote the other great bands on the Argonauta roster!”
With their debut of “History Of The Earls Of Orkney,” Doomed And Stoned reports in part, “CLAMFIGHT have always offered up a lot of fun with their song titles and especially their lyrics. This go ’round, they’re honed in on a theme, of sorts: the small Scottish islands of Orkney… III transports us to another world, one that is less fantasy and more a part of history, which is always twice as fascinating to me.”
Stream the new song at THIS LOCATION.
Booming with five massive tracks which total nearly forty-five minutes of groove-laden sludge-soaked stoner rock jams, CLAMFIGHT sounds more victorious in their thunderous mission than ever before on their third full-length release. III was recorded and produced at Gradwell House Studios in New Jersey by Steve Poponi, with additional recording by Davin Sosa and Christopher Skowronski. The album was mastered by Dave Downham at Gradwell House, and completed with photography by Woody Musgrove, and features guest contributions of lead guitar on “Whale Road” by CWolf, lead vocals on “Echoes In Stone” by Jean Saiz and Janette Valentine, and lead guitar and sonic spookery on “Echoes In Stone” and “Whale Road” by Erik Caplan.
CLAMFIGHT‘s III will see CD and digital release on January 19th through Argonauta Records; find preorders HERE.
A vinyl pressing of III will see release through Elder Magick with a release date to be announced.
III Track Listing:
1. Whale Road
2. Selkie
3. Echoes In Stone
4. Eynhallow
5. History Of The Earls Of Orkney
CLAMFIGHT has booked several new shows to break the new year in, beginning with a record release show for III in Philadelphia with Kings Destroy on January 19th. The next week they head south for two shows with Rukut, playing in Frederick January 26th and Charlottesville the 27th.
Watch for additional audio samples, tour dates, and more to be issued in the weeks ahead.
CLAMFIGHT Live:
1/19/2018 Century – Philadelphia, PA *Record Release show w/ Kings Destroy
1/26/2018 Guido’s Speakeasy – Frederick, MD w/ Rukut
1/27/2018 TBA – Charlottesville, VA with Rukut
The members of CLAMFIGHT, Joel Harris, Louis Koble, Andy Martin, and Sean McKee, are childhood friends turned grown-ass men who are almost as committed to big riffs as they are to each other. Influenced in equal parts by their dads’ vinyl, that sketchy older kid from woodshop class’ thrash and hardcore tapes as well as touchstone heavy bands like Sleep, Clutch, Neurosis, Eyehategod, and Mastodon, the band has plied its unique brand of suburban working slob metal up and down the East Coast of the United States since 2005. Having issued a debut album, Vol. I, in 2010, and a second album, I vs. The Glacier, in 2013, the quartet is now poised to release its third full length, III, through Argonauta Records.
https://www.facebook.com/Clamfight
https://clamfight.bandcamp.com
https://www.instagram.com/clamfight
https://twitter.com/clamfight
http://www.argonautarecords.com
https://www.facebook.com/ArgonautaRecords
https://argonautarecords.bandcamp.com
Share on FacebookShare on Twitter