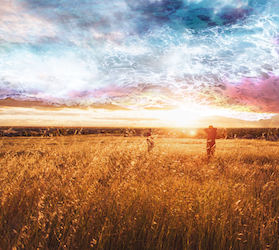 North Carolina based outfit FROM OCEANS TO AUTUMN return after their last album “A Perfect Dawn” of 2013 and several digital EPs released in 2014/2015.

Being a perfect blend of Post Rock / Ambient and Instrumental Post Metal sonorities, this will be a massive effort by the band, a stunning double album where huge landscapes typical of a band as JAKOB meets the impressive “wall of sound” of ROSETTA.

From Oceans to Autumn’s Brandon Helms (also in MAGI and MOUNTAINS AMONG US) says: “Writing and recording of this double album has been going on for 2 years off and on. Mainly in the fall months. We wanted something a little different, yet was still us at heart. The songs are more airy, with the guitars seemingly drift in and out of consciousness.”

“Ether/Return to Earth” is a sound experience where ethereal and dreamlike atmosphere of the first part is in opposition to the darker and “otherworldly” feel of the second one.

FROM OCEANS TO AUTUMN come-back has been scheduled in 2017 and will be released as 2CD/DD by ARGONAUTA Records.