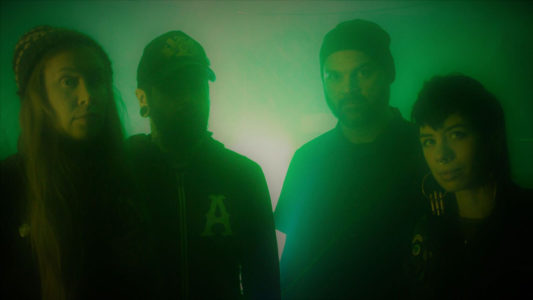 Green Meteor blends influences old and new into their heavy brand of space rock. Fuzz-saturated rhythms and cosmic soundscapes are charged with melodic vocals to create the perfect sonic accompaniment to their live visual experience.

On working with Argonauta: “When Gero, the high-command of Argonauta Records sent us a transmission about a rendezvous between Green Meteor and Argonauta Records in which we would create an international alliance with intent of reducing the cosmos to space haze via super-sonic assault, we were thrilled. Our vision and his aligned and thus the journey has begun! We are pleased to be a part of the roster and we are very confident that great things will come from this partnership.”
GREEN METEOR sound was formed in a space vacuum that managed to escape in 2015 and find its way to the stage 2016. The cosmic tribe was formed by Algar-a two wheeled space cowboy fueled by black hole bass fallout, 2T-a highly advanced killing machine turned drummer and space sound database, Amy-a moon Valkyrie mastered in the art of crushing sonic sound, and Leta-a shamanic space cheetah. Together they complete the space ritual known as Green Meteor.

The new album will be released during 2017, a must-have for fans of Kyuss, Acid King, Bongzilla and Hawkwind.