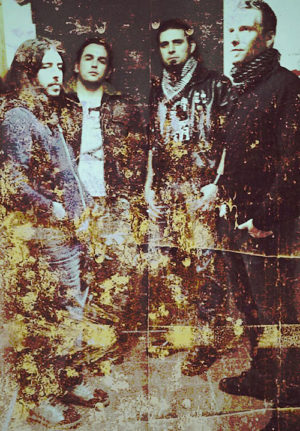 “This year we celebrate 15 years of activity, creating noise. 15 intense years, rich rewards, some disappointments, a lot of sacrifices, several people met, known, become friends or fleeting faces disappeared. Same thing for the bands. Hundreds of different sounds encountered on our way. Many of these remained, many vanished”, states the band.
“We are still here with five albums, a MCD, a split album, and more than two hundred concerts. To celebrate this period, fundamental to our growth as artists and humans, we decided to go out with an EP containing four songs. It will be a compendium of some pieces that are part of our history, played, arranged and recorded with the current physical strength, mental, emotional and creative. And also featuring one song never released before.
The work will be titled ’00 – 15: l’avanguardia industriale ‘and will be released in the fall 2015 by Argonauta Records. Also with a video track with live images and footage from the recording studio and created by director Ivan Ferrera. We will record at the Archensiel Studios Asti owned by our guitarist Paolo that will take care of all the recording process supported by our sound engineer Carmine Leone. The album will be mixed and produced by Oktopus at the Uptown Mixers in Harlem, New York. Oktopus is the musician tied to Dalek and has produced, in addition to all his records, even bands like Starkweather, Burnt by the sun, Candiria. In addition to producing the album he will participate with his visionary electronics parts in one song with Rennie Resmini, Starkweather singer. The artwork will be once again created by Marco Castagnetto (zenpunkart.com), author of the beautiful cover of La Dittatura del Rumore”.