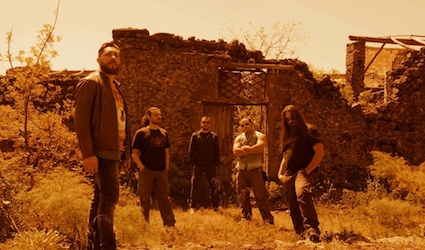 Rhino is a combo from Catania, that mixes elements of 70s and 80s hard rock, filtered by a common fascination for 90s desert stoner rock and the sulfurous influence of the Etna volcano.

As someone says, “…it hums with energy, feedback and stoner rock vibes, rocking and shredding all over the place…the band keeps up a high level of quality while showing off their skill with a variety of approaches to the brain-melting material”.

The band was formed in 2012 by bassist Frank ‘The Door’ and Guitarist ‘Red Frank’. They were immediately joined by the drummer ‘Lord J. Frank’. After a couple of lineup changes, and the departure of guitarist ‘Frank Sinutre’ at the beginning of 2015, the band found its balance with the inclusion of two new members: singer Frank ‘The Doc’ and guitarist Frank ‘Real Tube’.

RHINO say: “We are very proud to start our collaboration with Argonauta Records and especially happy to have met its creator Gero, who immediately proved to be a very helpful person and connoisseur of the band needs. We look forward to take the first steps with the label and we are confident that this relationship will open Rhino to new musical horizons.”

Since their birth, Rhino has stood out as one of the most active bands on the Southern Italian stoner scene, with a remarkable number of gigs and an eponymous EP released in 2013 (available here). The new full length is due by early 2017.