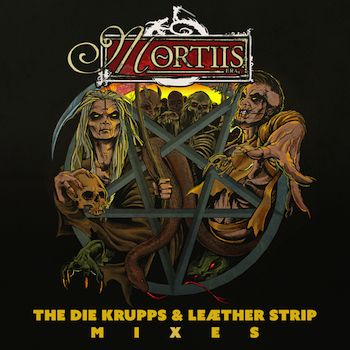 “We’re stoked to be able to open the floodgates, so to speak, of ‘The Great Corrupter’ in advance, and invite people to check out the Die Krupps and Leæther Strip mixes,” Mortiis said. “The album has 28 tracks in total, each one darker, denser, weirder, angrier and heavier than the next.”

‘The Great Corrupter’ is due for release on April 21. The record is a collection tracks from Mortiis’ The Great Deceiver album, deconstructed and masterfully “corrupted” by Chris Vrenna, Rhys Fulber, Die Krupps, John Fryer, GODFLESH, Merzbow, Apoptygma Berzerk, In Slaughter Natives, Raison D´Etre, Je$us Loves Amerika, PIG, and many more. The record will also contain unreleased material from the original recording sessions.

Mortiis will embark on a nine-date UK co-headline run this March with PIG, aka industrial pioneer Raymond Watts, ahead of the album’s release.

The official Mortiis webstore is now open at Mortiiswebstore, where fans can purchase vinyl, CD, Shirts, ect, as well as upcoming VIP packages for the UK tour.
Alternatively, Mortiis has also opened a webstore at the official Bandcamp site, where free downloads accompany most of the physical merch.