Mortiis VIP Package for “Swine and Punishment” tour, including copy of “lost” LP ‘The Unraveling Mind’ numbered in Mortiis´ own blood.

For the first time ever, Mortiis will offer an incredible VIP package, including a copy of Mortiis’ “lost” record ‘The Unraveling Mind’, to fans in the UK this March. 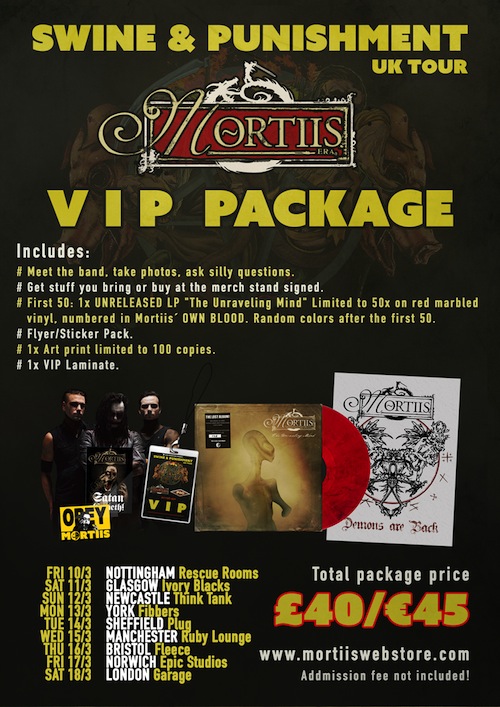 The package will offer a Meet and Greet with the band, where fans will be able take photos, have merchandise signed and ask all those long-pondered questions.

Additionally, the VIP package will include a copy of ‘The Unraveling Mind’, recorded in 2006 for an underground horror movie and unreleased until now. This release is strictly limited to 250 copies, split between five different vinyl colors. The first 50 copies, on red marbled vinyl, will be hand-numbered in Mortiis’ own blood. After the first 50 are sold out, fans can choose from the other four colors. Other goodies will include a flyer and sticker pack, an art print limited to 100 copies and a collector’s VIP Laminate.

The 4 other colors, will also be available worldwide via the Mortiis Webstore, and preorders are taken now.

Please note that the Red “Blood Vinyl” is only available as part of the VIP Package. Order here.

The four other colors: Dark Blue, Clear Yellow. Transparent, and Glow under UV light, will also be available worldwide via pre-order at the Mortiis Webstore. Click here to preorder.

The VIP package may be purchased via the Mortiis webstore. It will be available for all nine dates on the upcoming alternate-headlining tour with PIG, aka industrial pioneer Raymond Watts.

If you already booked tickets for one of the shows, don´t worry, as the VIP package does not include admission to the show.

Mortiis will embark on a nine-date UK co-headline run this March with PIG, aka industrial pioneer Raymond Watts, ahead of the album’s release.

The Free Download single with Die Krupps and Leæther Strip Remixes, is still available from the Mortiis Bandcamp site.

“We’re stoked to be able to open the floodgates, so to speak, of ‘The Great Corrupter’ in advance, and invite people to check out the Die Krupps and Leæther Strip mixes,” Mortiis said. “The album has 28 tracks in total, each one darker, denser, weirder, angrier and heavier than the next.”

‘The Great Corrupter’ is due for release on April 21. The record is a collection tracks from Mortiis’ The Great Deceiver album, deconstructed and masterfully “corrupted” by Chris Vrenna, Rhys Fulber, Die Krupps, John Fryer, GODFLESH, Merzbow, Apoptygma Berzerk, In Slaughter Natives, Raison D´Etre, Je$us Loves Amerika, PIG, and many more. The record will also contain unreleased material from the original recording sessions.