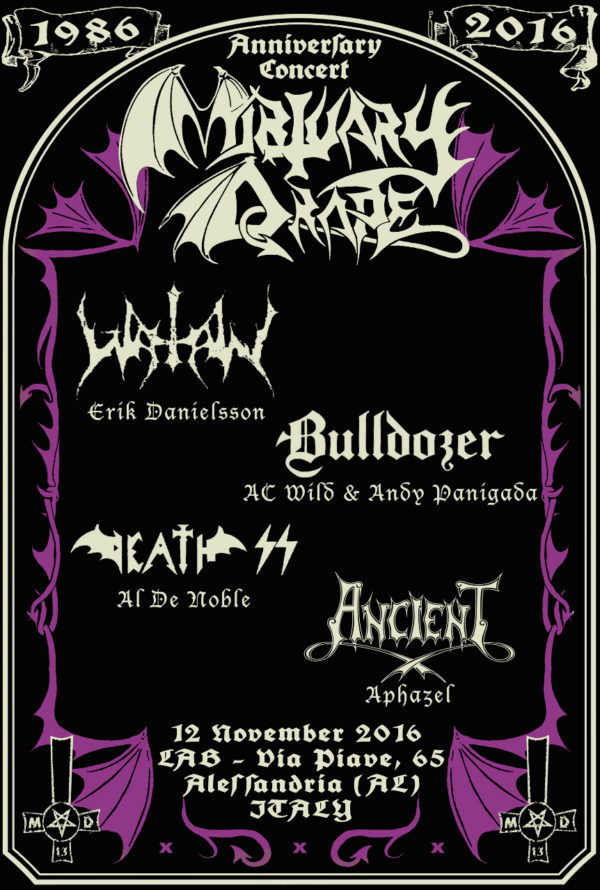 More great guests have been confirmed for the MORTUARY DRAPE’s 30th anniversary show. Besides Erik Danielsson (WATAIN) and AC Wild (BULLDOZER), Andy “Bull” Panigada (BULLDOZER’s guitars player), Al De Noble (DEATH SS and SECRET SPHERE’s guitars player), Aphazel, frontman of the mighty Norwegian black metalllers ANCIENT, well known for their classic album “Svartalvheim” (1994) and they just released the new album “Back to the Land of the Dead”, will take part of the show.
More guests will be announced soon.

It’s available also the Anniversary Pack in order to celebrate the event. The Anniversary Pack will contain:
– screen-printed poster of the show made by Erik from Watain;
– numbered ticket of the concert;
– unreleased 2-LP “1986-2016”. Sides A, B, C will feature a best of, featuring 13 songs chosen by WATAIN’s mainman Erik Danielsson, a big fan of the band; side D will feature 3 songs recorded live and the cover of Mercyful Fate “Nightmare be thy Name”;
– bag with Mortuary Drape’s logo.

You can order your Anniversary Pack (29 €) by October 31 sending an email to: info@mortuary13drape.com

The ticket of the show can be bought in advance (12 €) sending an email to: info@mortuary13drape.com