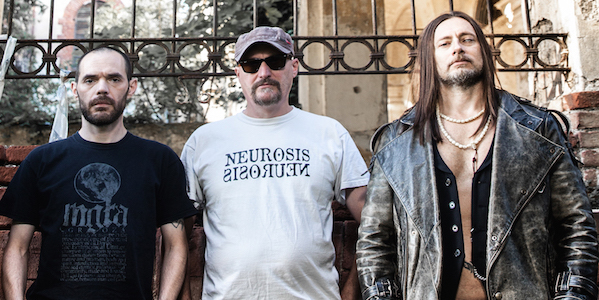 Psychedelic ritual sludge trio NIBIRU will enter the studio in February 2017 to begin recording its long-awaited follow-up to “Padmalotus”, which was released by Argonauta Records in 2015.

NIBIRU frontman Ardat comments: “After the release of ‘Teloch’ 12” EP as a four-piece in Spring 2016, we will enter MusicLab Studio to record our new effort live in the studio in February 2017. The new album, called ‘Qaal Babalon’, will be the perfect incarnation of Nibiru as power trio. Working with the drummer L.C. Chertan we found harmony, professionalism, accuracy and anger. According to me and Ri, a lot of rage is essential. Our new music emerged from the deep with no effort. We do not love the peace of soul”.
“The songs have been written between October 2016 and January 2017. We are very happy about the result. NIBIRU came back to their roots, to a sound that is ours. Since the beginning this kind of sound is a NIBIRU trademark. Psychedelic, ritualism, noise were, are, and will be NIBIRU. The album will be ready in Spring 2017. In profundum laci”.