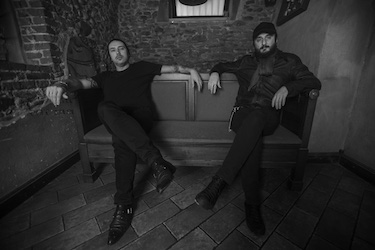 THEBUCKLE is a rock duo founded in 2014 by Andrea (Guitars + vocals) and Maxim (drums). THEBUCKLE is an explosive mixture of hard rock, stoner, post-punk, and hardcore. The result? A fiery and pounding music, crossed by a dark and gloomy atmospheres and unhealthy, obtundent, memorable melodies.

“We know each other like brothers, we spent the half of our lives playing together, and we’re still enjoying ourselves. We founded the band Unwelcome in 1994, and we were involved in the crossover & hardcore scene of the 90’s. It’s been a relevant part of our lives. With THEBUCKLE we wanted to explore some of the influences we’ve achieved: stoner, hard-rock, grunge, post-punk. And we wanted to keep it as simple as possible. That’s why we decided to stay as a duo”.

First album titled “Thebuckle” has been released in 2015 through This Is Core rec. and received great reviews and it was followed by promotional tour dates.

“For the new album we wanted to do something more personal, we wanted to explore new sounds and new possibilities. We wanted it to be more various, less genre-related. We also had the possibility to have Xabier Iriondo (guitarist from Afterhours, Bunuel, Todo Modo, etc.) in the studio playing some music with us, and it’s been real fun!”

About the collaboration with the label, the band says: “We heard of Argonauta Records from members of other bands, so we contacted Gero to speak about a possible collaboration. He listened to our new album and everything have come really smooth. He’s a cool guy and we’re happy to have our music released through his label.”

The new album is scheduled to be released in CD/DD by early 2017, those of you into MUDHONEY, QUEENS OF THE STONE AGE and THE STOOGES sonorities will be not disappointed.

You can have a taste of the band by checking their old videoclip.