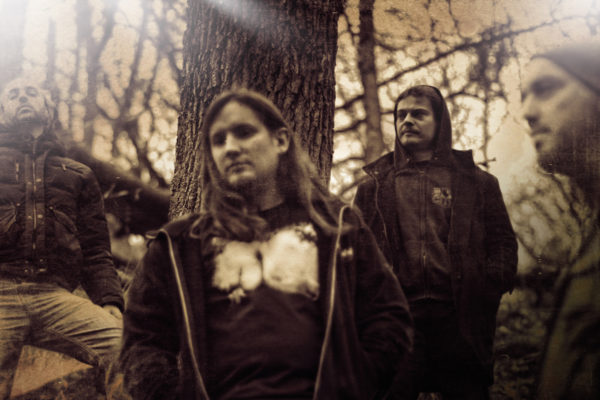 Beyond excited to announce a new name being part of ARGONAUTA Records family. EYES FRONT NORTH from France are authors of an intriguing kind of Blackened Post Metal with elements from post-rock, sludge & doom.

In 2010, after several years playing in the French metal band AMBRYO, Lionel FOREST (vocals / guitars), Nicolas SIMON (guitar) and Victor TURHAN (bass) decided to create a new studio project called EYES FRONT NORTH to explore new directions. They composed a lot and succeeded in developing a dark, hypnotic and deeply evocative music. The band worked 2 years with Conny PETTERSON from Swedish Death Metal band ANATA as session drummer. They released together a Ep – which received great reviews from all over the world – and a split 7″ with French progressive metal band THE BLACK NOODLE PROJECT and available here: https://eyesfrontnorth.bandcamp.com/

In 2013, time was came to rehearse and to play live, so the band recruited Xavier DOMERGUE as a real drummer. This new musician brought something very unique that gave EFN new horizons.

The new album is scheduled to be released by Spring 2016, mixed and mastered by Jack SHIRLEY at the Atomic Garden in San Francisco (DEAFHEAVEN, WHIRR…).

The band says: “Hi Folks! We, the 4 of EYES FRONT NORTH – known as Lionel, Nicolas, Victor and Xavier – are very proud and happy to announce that we signed with Italian label ARGONAUTA RECORDS. We are really in a hurry to present you our amazing record, produced by Jack Shirley who worked for DEAFHEAVEN. Thanks Gero of Argonauta for your trust!”