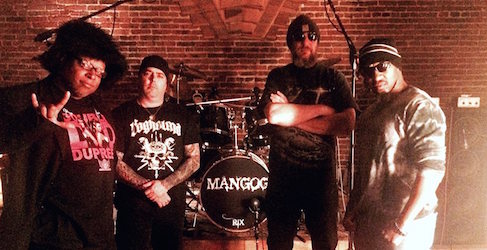 The new album by Maryland based Doom metallers MANGOG is out today (Jan 9th, 2017) via ARGONAUTA Records! You can experience it in full via THE OBELISK at this address.

Featuring members/ex members of REVELATION, IRON MAN, AGAINST NATURE, BEELZEFUZZ “Mangog Awakens” is a true doom manifesto highly recommended if you like Candlemass and Saint Vitus.

BAND OVERVIEW:
Mangog is a doom metal band based out of Baltimore, Maryland. Formed by bassist Bert Hall Jr. (Revelation and Against Nature), Drummer Stephen Branagan (Revelation, Against Nature and Yet So Far), Major Company’s Bassist Darby Cox and Final Answer’s Vocalist Myke Wells. In February of 2015 Drummer Mike Rix (formally of doom legends IRON MAN) replaced Steve Branagan.
After a year of REVELATION and AGAINST NATURE being on hiatus, bassist Bert Hall Jr. (now on guitar and vocals) assembled a lineup to form a dark alliance founded on the copious use of punishingly heavy riffs, odd ball time signatures (13/8 anyone?) and dystopian lyrics. The band entered the studio in March 2015 and recorded their debut EP titled “Daydreams Within Nightmares”. One year later in 2016 the band completed recording its first full length CD “Mangog Awakens”, and was signed to Argonauta Records.