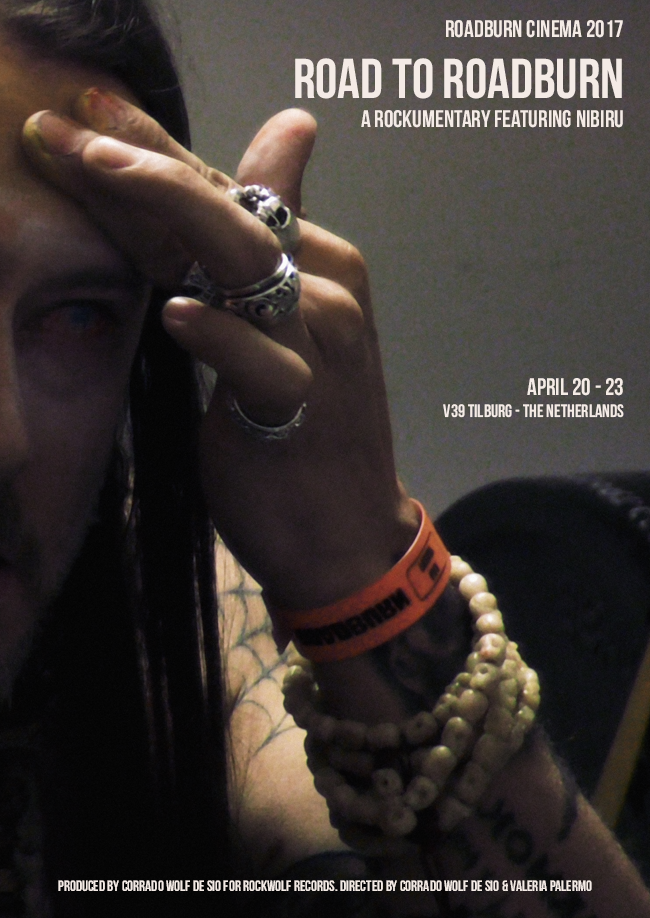 2017 sees the return of Roadburn Cinema!

In 2016, Roadburn Festival played host to Italian doom-psych trio, Nibiru. As the band made preparations to head to Tilburg, they documented the journey – both literally and metaphorically – as they got themselves ready to perform in front of an eager Roadburn crowd. Directed by Corrado Wolf De Sio and Valeria Palermo, Road to Roadburn is a true rockumentary charting the ups and downs of Nibiru’s voyage to Roadburn. In 2017, we’re thrilled to host the premiere of this fantastic film.
The idea was to follow a band which reaches the goal to play at Roadburn Festival.

We begin our journey in Italy, shooting Nibiru at some gigs they played before Roadbun – to get in the right tune and be ready to rock at their best at the Festival.
Ardat, singer and guitarist of the band, and the other members talk us about their philosophy, attitude and passion, as well as the language they choose to sing to: Enochian, the language spoken by Angels, which goes along to their noise. A noise that’s music for us, and we really like.

As long as we get to Tilburg, the Roadburn Festival becomes a main character of our movie as well.
We try to describe the atmosphere of the place, something we like to feel part of every year; something that we can say it’s really spellbinding, with fans, musicians, artists all together.
Strolling around through the venues and the pub road we get in touch with the Life of the Festival; in the pubs you can meet old friends, Festival “veterans” and we meet with Nibiru after the journey: it’s time for some beers, chats and relax all along.
While we spend our time in the area we try to understand what are the feeling of musicians, fans, journalists who come here to take part of this kind of “religious ritual” that takes place only at Roadburn Festival.

Then we film Nibiru’s exhibition at the Extase, which was packed with an enthusiastic crowd – their gig was a success.

At the end we meet the band the day after the gig: they’re even more excited than before, when they were just attending the festival in the crowd: finally they’ve been part of the festival they (and all of us) love as protagonist.

“In a such short time – just 5 years – Nibiru reached an absolute, true, sincere and intense fulfilment.
Obviously there have been some difficulties, that have been solved and we just consider worth nothing compared to the goals we reached”, states NIBIRU frontman Ardat. “The climax is our attendance at Roadburn: we received unbelievable feedback from the crowd. Everything is beautifully, intensely and emotionally featured in the documentary “Road to the Roadburn” which will be premiered at Roadburn 2017. We are astonished and proud of this recognition. This is an amazing prologue to the release of our fourth full-length “Qaal Babalon”, after the EP “Teloch” released last year. A big thank you to Walter and Corrado and to their wonderful teams”.