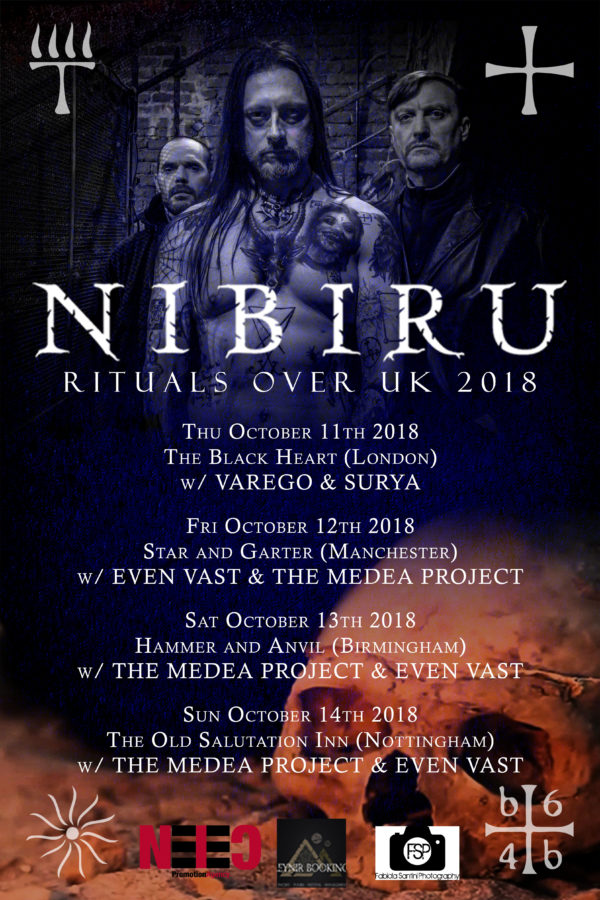 For the first time in their successful career Italian ritual psychedelic sludgers NIBIRU will tour as headliners in UK in October 2018!

The band will be hitting the road for 4 dates next month. Italian heavy prog outfit VAREGO and London-based doom atmospheric sludge post-metal merchants SURYA have been confirmed as special guests at The Black Heart in London on Thursday October 11th.

Nottingham based gothic death doom trio THE MEDEA PROJECT and UK sludge doomers EVEN VAST will support NIBIRU in Manchester, Birmingham and Nottingham.

NIBIRU was born in 2012, following a relentless process of spiritual and emotional knowledge that involves every member of the band and is reflected in a totally free and impetuous creative approach. Since the first album Caosgon, the music of NIBIRU is recognized a unique identity, instinctive and difficult to label in an artistic panorama overloaded by clone bands and lack of originality. These characteristics are further developed in the next records. Netrayoni, Padmalotus and Qaal Babalon got amazing reviews from press worldwide. The genre proposed by NIBIRU could be described as Ritual Psychedelic Sludge and finds no term of stylistic comparison with other active bands, although the influences of Black Sabbath, Neurosis and MZ.412 have always been pretty clear since their inception until today. The musical journey to the dark star NIBIRU is an experience from which anyone can only come back deeply changed, an evil and visceral representation that sets new rules for genres such as black metal, sludge and drone as we know them.

NIBIRU managed to play several shows with ORANSSI PAZUZU, UADA, MORTIIS, SUMA, NIGHTSTALKER and PHANTOM WINTER. Their performance at Roadburn Festival 2016 was unforgettable! The band is currently putting the finishing touches on their upcoming full-length album.

NIBIRU’s live rituals are a unique experience that only the witness can describe. Check one of their latest shows below:

Tickets are on sale now!