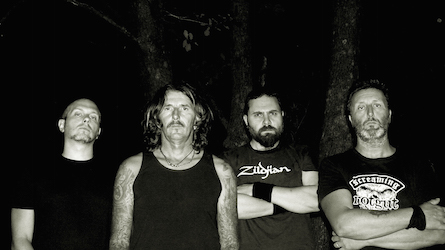 Italian Post Metal / Sludgers VAREGO announce new album after the acclaimed debut “Tumultum” (2012), the follow up EP “Blindness of the Sun” (2013) and the digital single “Phantasma” (2015).

The new album is entitled EPOCH and captures the band at its very best, with renewed vibes in their sound made of unceasing guitar riffing, yet built on progressive structures with a sort of cinematic touch.

EPOCH will be made of six long tracks and will see the band renewing its long time collaboration with legendary producer BILLY ANDERSON, by caring mixing and mastering.

The band says: “The new album EPOCH is our most relevant effort to date, born after several months of hiatus that gave us a new belief and attitude towards our means and targets. We are plenty satisfied of the band work, being able to capture and build up something different than before, keeping our roots alive and transforming them into an original sound full of energies and atmosphere. Having big influences from bands as MELVINS, NEUROSIS, VOIVOD and MOTORPSYCHO, our aim was to create a sort of celebration of a certain music attitude and method. And the new partnership with Billy Anderson did the rest”.

While the first taste of the new album will be revealed soon, the band just released a promo teaser available here

EPOCH will be released Fall 2016 in CD/DD by ARGONAUTA Records.

Press says:
“With unrelentless precision and fury, this beast known as Varego is set to unleash upon you. These progressive sludge metallists from Italy warp your mind with an eclectic mix of metal that runs rampant through your veins and poisons your soul.” HEAVYPLANET

“They are here to do business. And I mean Heavy Sludge business.” ECHOESANDDUST

“Varego are as experimental in their sound as they are in naming their chosen genre. They refer to themselves as ‘avantgarde chaos’ – something I’m happy to go with.” MOSHVILLE